SITE SELECTION
BARTOW MEANS BUSINESS. Reinvention is taking place. Regulatory red tape is being slashed. Incentives are immediate; and a skilled, technically-proficient workforce is ready to go to work for you. On this page you’ll see our three “HOT” listings, available inventory of industrial, warehouse, office buildings for rent, lease or sale; and what we’re working on prospectively for Bartow. Find out why you should choose Bartow.

Bartow Chamber member companies can provide a complete list of Business/Commercial Properties in and around Bartow:

The Bartow Municipal Airport offers transportation and distribution opportunities as well as manufacturing sites. The airport has a large industrial park with a variety of tenants including cold storage, water treatment facility, trucking, as well as county and state offices.
There are approximately 1300 employees who work at the airport with its more than 100 hangars for the storage of aircraft, and about 130 based aircraft. The airport and industrial park contribute more than $350 million to the area’s economy.

Clear Springs, the development, is an exciting project of 18,000 acres of land. The Clear Springs company is committed to developing the entire property with a focus on economic development for the area, in partnership with local and state governments.      The 18,000 acres of former phosphate mines surrounding the City of Bartow on the east and south sides will be transformed into a vibrant community, with a sustainable economy and land preservation. The project will gradually come to life, over a period of 20 years. Clear Springs matches the Central Florida Regional Growth Vision:

DOWNTOWN AVAILABILITIES.  Mainstreet Bartow, Inc. has listings of buildings for sale and lease. Check them out – most are eligible for Community Redevelopment Agency incentives.

DOWNTOWN DEMOGRAPHICS. Mainstreet Bartow has listings of buildings for sale and lease. Check them out – most are eligible for Community Redevelopment Agency incentives. No, that reduction in the rate for electricity that appears in your latest utility bill is not an illusion. Nearly all Bartow utility customers, both residential and commercial, will see a reduction of at least 9.5% in the amount billed for electricity under the new rate schedule that was recently adopted by the City Commission.  “It’s for real, and the reduction is not expected to be the last one” according to Bartow City Manager George Long.

BARTOW IS LOWEST IN THE STATE FOR APRIL, 2018

Events leading to this welcome news actually date back to 2010 when the City solicited bids for the wholesale purchase of electricity. That effort resulted in termination of a 53-year relationship with the former generator and negotiation of a new contract with Orlando Utilities Commission (OUC), the lowest cost bidder, that became effective on January 1, 2011.

The OUC contract differed from traditional utility contracts in two important ways. First, it provided for wholesale purchase of electricity for a relatively short 7-year period as opposed to a more typical duration of one or more decades. The shorter term purposefully limited the period during which both the City and its customers could be “locked into” higher costs than could be justified by fuel market conditions. Second, it provided the City with the latitude to purchase up to 10% of the community’s electricity from a renewable energy generator. If achieved on a long-term reasonable fixed-rate basis, without debt or capital expense to the City, this initiative would serve as a hedge against rising electricity costs in the future and result in a cost savings to Bartow electric customers.

The OUC contract also made it possible for the City to implement a 2-9% electric rate reduction later that year for the first time in its history, despite the still-evolving impacts resulting from the Economic Crash. Unfortunately, those same impacts delayed immediate pursuit of the solar initiative.

By 2016, economic conditions had noticeably improved. The cost of traditional fuels used to generate most electricity had declined significantly, were still dropping and Bartow was in the sixth year of its OUC contract. Concurrently, an excess supply of solar panels had developed in the market, reducing the cost to construct solar projects as well as reducing the cost of solar-generated electricity.

At that point, the City solicited proposals to construct, operate and maintain a solar electricity generating facility to provide approximately 5-7% of the community’s total annual electricity demand. NovaSol Energy was selected to develop the project, at its expense, following evaluation of eleven (11) proposals that were submitted. 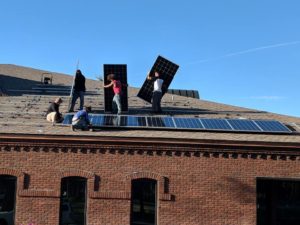 The City will be NovaSol’s only customer. The project has been developed on a 40-acre parcel on Gaskins Road which has been deeded to the City. In addition, NovaSol has funded and installed a rooftop solar array at City Hall that is expected to meet approximately 30% of its annual electricity demand.

Concurrent with the design and construction of the NovaSol project and, with the above-referenced OUC contract in its last year, bids were again solicited for purchase of the City’s base electricity supply. Following analysis of 46 different bid combinations that were considered, the City made an overlapping contract award (lowest cost combination) to OUC and Florida Municipal Power Association (FMPA) for 3 years and 5 years, respectively.

The new electricity contract(s) became effective on January 1, 2018 and will supply the bulk of the City’s electricity demand until January 1, 2023. The new solar project became fully operational on March 30, 2018 and will supply approximately 12 million kilowatt hours of electricity per year, enough to accommodate the needs of more than 1,000 typical Florida homes, for the next 25 years. And, a new electric rate schedule was enacted by the City Commission which became effective on April 1, 2018.

“Bartow’s electricity demand has been fully secured at a favorable cost for the next five years and, to some extent, beyond. That will translate to a substantial rate reduction for our customers,” said Long. Under the new schedule, electric rates will decline approximately 9-13% for most residential customers and 9-17% for most non-residential customers; the higher the level of electricity usage, the greater the rate reduction. “Extremely low usage customers will realize a somewhat lesser rate reduction.”

CITY COMMISSION WITH A VISION: COMMITMENT TO MORE SOLAR FARM USE

In addition to what has already been described, the City Commission recently committed to purchase 13MW of solar-generated electricity through FMPA at very favorable pricing commencing in mid-2020, further reducing the City’s cost and dependence upon traditionally-fueled generating plants. The electricity will be supplied by a new solar facility in Osceola County that will be constructed early in 2020.

Should the project proceed as expected, solar energy will be supplying an estimated 20% of the City’s total electricity demand about two years hence. Long projects that a modest electric rate reduction may be “in the cards” at that time.

But, that isn’t the end of this story.

City commissioners recently approved a revised net metering policy to further incentivize private property owners to generate their own solar electricity. Should a private system generate more electricity than needed to meet its owner’s demand, the excess will be purchased by the City through an interconnect agreement with the owner.

“It’s a win-win arrangement for both the City and its customer. But cost isn’t the only consideration. Utilization of renewal energy sources to every reasonable extent is environmentally important, as well . . . and Bartow is doing its part,” said Long.

Looking even farther down the road, Long expects to be evaluating the feasibility of incorporating large-capacity energy storage into the City electric system. Stay tuned! 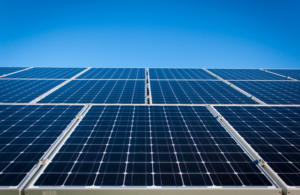 City Commissioners’ and City Manager George Long’s years of effort to lower electric rates is paying off big for the citizens of Bartow.